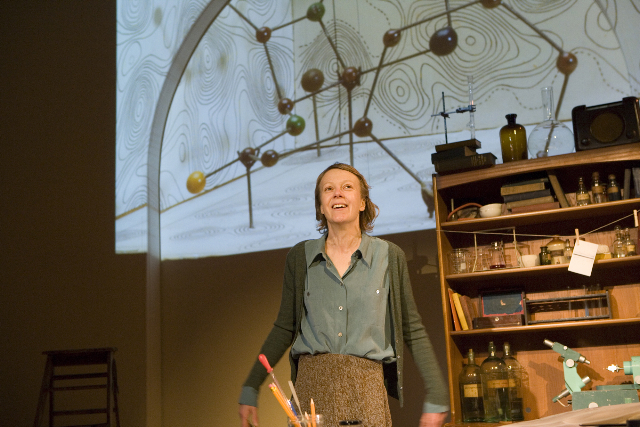 Hidden Glory: Dorothy Hodgkin in her own words is a 40-minute, one-woman show with projected images and recorded sounds. It was commissioned by the Oxford University Museum of Natural History for performance to an invited audience on 10 May 2010 prior to the unveiling of a bust of Hodgkin in the museum to mark her centenary (she was born on 12 May 1910). It received a second performance on 13 May 2010 in the new Simpkins Lee Theatre at Lady Margaret Hall, Oxford.

The performance was created by theatre professionals under the name Hodgkin Centenary Productions. Director Abbey Wright was formerly Resident Assistant Director at Donmar Warehouse where she worked with Michael Grandage and other leading directors. She has gone on to direct many acclaimed productions both in the West End and around the country. LAMDA-trained actress Miranda Cook’s credits include performances at the Arcola Theatre, the Orange Tree and Greenwich Park, as well as new writing development for the Young Vic, the Wrestling School and Southwark Playhouse. The production was supported by a small professional design and production team: Andy Reader (lighting designer and production manager), Florence McHugh (designer) and Chris Barlow (sound designer).

I created the script almost entirely from Hodgkin’s own letters and reminiscences. It covers her childhood love of chemistry experiments, her student years, love, marriage and children, and her research into penicillin and insulin. It shows how her personal and scientific lives were fully intertwined, and explores the passions that underpinned them both.

With support from the Chemical Society and the University of Cambridge Department of Biochemistry, Hidden Glory toured to five further cities during the autumn of 2010. The final live performance took place at the Wellcome Trust Sanger Institute in Cambridge in September 2012 as part of its Sex in Science programme. With support from Sanger, the performance was professionally filmed and the DVD can now be made available under licence to educational organisations for public showings. Please contact me if you are interested.

‘I thought the play was beautifully written and beautifully acted. I would strongly recommend it to anybody who is curious about the pathways to extraordinary creativity’.

‘A triumph – interesting, delightful, entertaining, and informative. What more could one wish? I think the crystallography really did take its place dramatically, as did Dorothy Hodgkin’s excitement at scientific work and discovery.’

‘It so well captured [Hodgkin’s] extraordinary courage, determination intelligence and capacity for hard work, coupled, with an impish sense of humour and integrity.’

‘Miranda Cook was simply terrific in the role but the whole production was excellent – we were all held by it.’