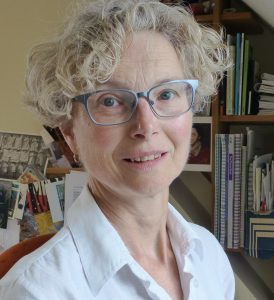 I was born in Hong Kong. I went to Ellerslie School in Great Malvern, then to Lady Margaret Hall, Oxford: I graduated in Experimental Psychology.

I worked briefly for a science publisher before joining New Scientist magazine as a section editor. Soon afterwards I began to present science programmes on BBC Radio 4.

I am married to David Long. We settled in Oxford and have two sons, Ed and Will. Since moving to Oxford I have worked mostly as a freelance writer, editor and broadcaster. From 2000-2007 I edited the former Oxford University alumni magazine, Oxford Today.

I am a founder member of the Abbey Shakespeare Players, who have presented a Shakespeare play in the ruined abbey of
St Dogmaels every August since 1987. We recently bought a second home in
St Dogmaels and spend increasing amounts of time there.

On Sunday afternoons I sail a British Moth on the Upper Thames at Medley Sailing Club.

Inevitably I also edit the club’s newsletter, The Ripple, and since December 2018 I have been the Commodore.